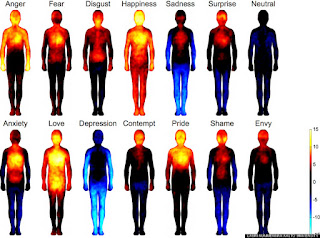 Depending on who you ask, emotions can have a positive or negative connotation. Being "emotional" isn't exactly the best adjective to describe someone; however, there is a method to the madness. Expressing emotions benefit the body in more ways that one.

Suppressing emotions can create symptoms that range from a sore throat from not wanting to speak to someone to lung problems when sadness feels overwhelming. Most can probably identify with someone literally becoming a "pain in the neck." In essence, physical issues can be connected to emotional imbalances.

"Everything affects everything." This sentence has become my favorite line. For instance, let's say that you're alone in the woods and get lost. The path is nowhere in sight and the nice allure of a songbird's tune has now morphed into the possible growling of a ferocious wolf! ...or at least that is what's going on from your perspective at the thought of being lost forever in uncharted territory. Your blood pressure begins to increase, sweat pops out on your forehead, the heart starts pounding, and  blood is now being transferred from your organs to the muscles to make a break for it.

You can relate. Although you may not have gotten lost in the woods, it's the same concept. Whenever there's a pop quiz, a deadline that you forgot about, or perhaps leaving your cell phone at home when it is your lifeline to your business, your body goes into fight or flight mode when stress levels rise. Going back to the example in the woods, the emotion of fear is directly related to the psoas (so-as) muscle, which attaches to all of the lumbar vertebrae and discs as well as the inside of the leg. Why is that important? Emotions can create physiological responses with muscles via the central nervous system. If one side of the psoas shortens more than the other, then gait is affected. Meaning... you'll be walking around in circles in the woods for quite some time. Ain't nobody got time for that!

Rather than bottling the emotion and trying to not think about it, acknowledge it and ask yourself why you feel that way. What's the good in the situation and how can you make it better? Sometimes you're powerless to change the situation, such as a car wreck. Yes, it's frustrating. However, it doesn't have to rule your life. Keep in mind that 10% of life is what happens to you, and 90% is how you react.

Some things are harder to let go of than others. Nonetheless, there are simple ways to find peace during times of trials and suffering. Here are a few...

Ways to Zen Out:

Meditating isn't just for hippies. The benefits of focusing on the positives of the day increase endorphins - the natural happy drug.

Spinal extension and opening up the body actually increase brain activity in the frontal cortex. Lack of exercise decreases brain tissue volume. Atrophy of the brain leads to dementia and cognitive decline. Patients who had higher heart rates and blood pressure when being tested during exercise were shown to have smaller brain sizes.

With computer and desk jobs that require us to be in a flexed position all day, we need to balance it out with extension exercises on a regular basis to strengthen the spinal muscles.

Your diaphragm is a muscle too. Much like other muscles, it needs its exercise as well. Skimp on building up the diaphragm? Chances of hiatal hernia increase, as well as pain in the lower thoracics and upper lumbars.

Put one hand on your chest and one hand on your stomach. To deep breathe correctly, you want the stomach to rise before the chest. If you're having trouble, then it's certainly something you'll want to practice more often.

Sport psychology - You're stimulating the same places in the brain as if you were doing the activity. This is an example of what great athletes do to help them prepare for upcoming games and to overcome feelings of anxiety.

Athletes & stars who use visualization:

Study #1: Stanford University study found that a 90 minute walk in nature can affect the brain in a positive way. Half of participants walked through a park while the other half walked in a city.  Those who had the opportunity to experience nature had lower levels of blood flow to the part of the brain that deals with rumination.

“Rumination is a pattern of thought focused on the negative of oneself. We wanted to see how we regulate our emotions. The people in the experiment shifted the way in which they engage with nature. They shifted their attention away from those thoughts.” - Gregory Bratman, PhD

Study #2: South Korean University: Performed functional MRI scans when participants saw nature scenes. There was increased activity in the anterior cingulate gyrus (linked to positive outlook and emotional stability) and the basal ganglia (linked to the recollection of happy memories).

Find what works best for you. Your system needs to be in place long before strife becomes a factor in your life. That way you'll be able to handle the stresses that arise appropriately without creating a funk within your body. Ultimately, it's all about finding the balance.